One last little last minute drawing to close out the year.  By now it's part of my New Year's Eve tradition to churn out one last little piece before the new year, no?

Speaking of traditions, I've got my grapes ready.  So does this grape loving lady.  Do you?

We're playing it mellow tonight and being homebodies. Nothing that requires fancy hairdos like the one above. I'm about to bake some cookies. Soon enough it'll be supper time. Later tonight, it's champagne cocktails. There will probably be cat cuddling somewhere in there. And then it's so long, 2012!  Adios! Goodbye! Get out of here! Scram!

Happy New Year, one and all!


Pin It
Posted by alicia policia at Monday, December 31, 2012 No comments:

Bake Yourself a Merry Little Christmas 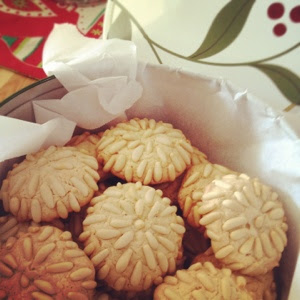 It's Christmas Eve, which means I finally have time to do some good old' fashioned baking (complete with modern appliances! Seriously, I think I used half almost every item we received from our wedding registry over the past two days...).

This year has been the busiest Christmastime in recent memory (for me, at least), which meant I never did get around to working on all the Christmassy crafts and goodies I wanted to do. Ho-hum, boo!

But today... Today I got to bake, and baking is relaxing and a general pleasure to me. 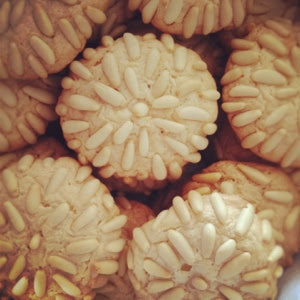 The great thing about baking at Christmas is that there is almost never a gift conundrum that can't be solved by baking. That, and there are plenty of people around suddenly willing to share and indulge. Hooray for sharing! Hooray for indulging!

So, I'm happy. I hope you're happy too. Merry Christmas!


It's already December 10th! That means I need to hurry up and decide what this year's Christmas card is going to be, but sometimes that decision can be torturous. I thought on all it all day yesterday, and I have (virtually) nothing. Even looking upon my collection of previous years' cards for ideas and inspiration has left me blank.

I reckon one could tell me to just take it easy and just go print up a photo card with a ready made template at the store/pharmacy/whatever. To them, I say, "No!" Sure, that's cool for other folks, but I must draw and make my own Christmas cards.

Why?  Well, 1) I'm an artist, so I kinda have to draw my own, right? and most importantly, 2) it's a family tradition going back decades and decades (well back into the 50's that we can tell) that I will not allow myself to be the first one to break by not drawing my own card.


So, of course, I draw my own cards. As my mother did before me. And my grandmother did before her. And as I hope at least one hypothetical child I might have of mine own might do after me.


See, I even dredged up a couple of the cards from my childhood that I "helped" color in. Look how cute they are! That's a drawing of my brothers and ours dogs and little me, in case you couldn't tell, (anda card featuring some Christmas mice, also drawn by my mama). I love how I colored in our shaggy mutt, Med-Med. Cute!

Anyway...I should just be thankful that I don't have to hand color all of my cards like my mom did. Or hand trace them all on a homemade lightbox like both she and my grandmother did before the time of Xerox. Or, even harder yet, hand carve multiple linoleum blocks for a multi-colored print! How did they do it!?!?

Ok, so maybe I shouldn't think of deciding on my Christmas card design as torturous.  I have it pretty easy what with my fancy dancy home printer and all.  And I know from my family's multi-generational knowledge that sometimes Christmas card inspiration ccomes to you at the very last minute.

Besides, I am more than happy to keep up the tradition! 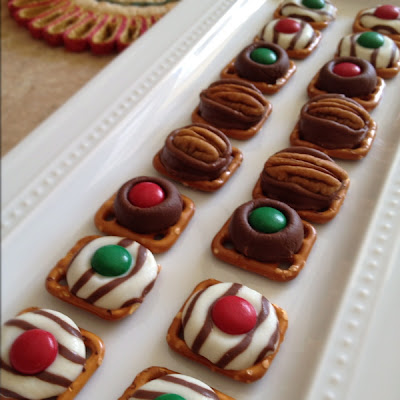 Tonight, it's tree trimming night at our little casita. Hooray! Typically, this means we forego a normal night's dinner in favor of treats and tidbits to munch throughout the tree trimming tasks, err, festivities. It helps that we like to wash it all down with a nice mulled wine. Mmmm! Mulled wine! 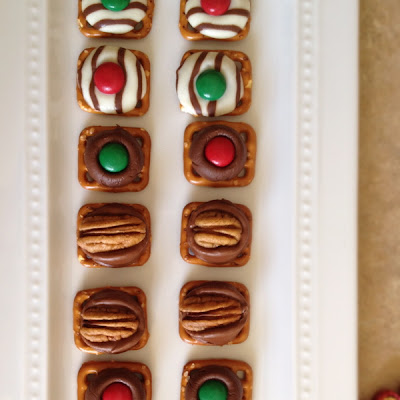 This year, I decided to give these very-popular-on-Pinterest-pretzel-plus-candy snacks a try (they're so popular in fact, that lots of the pins of them are spam, so be careful what you pin! The link above takes you to the actual blog post I referenced).

They look simple and yummy enough, right? But we all know that sometimes, well, Pinterest just flat out lies.

Not so this time. It worked! 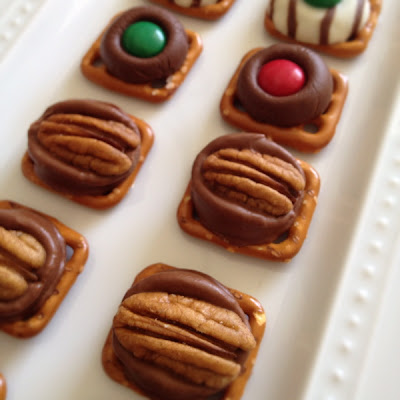 They consist of pretzzel squares (some pinners show them with pretzel rings, but they did not have pretzel rings at the store to which I went), Hershey's Hugs or Kisses topped with an M&M (actually, mine are topped with Hershey-ets which I didn't know existed, but I like they they are blank on both sides, unlike M&Ms which have M's printed on them). There's another variation of Rolos topped with pecans to make a turtle of sorts, but I made them the same way. 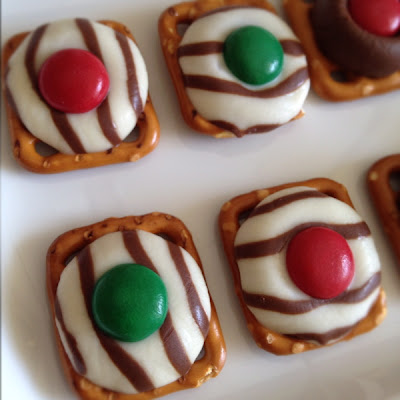 I heated my oven to 200ºF, and baked the candy topped pretzels for about 4 minutes (until just melty). I then plopped the candy or pecans on top – I had to push them down on the Kisses and Rolos, but the Hugs just spread easily on their own as soon as I dropped the candy on top.

Except, with the second batch I made the Hugs had a kind of a light bleemus (a bit of a skin) to them, which did not make for as pretty a treat.  Maybe I should have left them in there a few seconds more for a smidge more melt? I popped them in the fridge for abit after they had cooled off to help set them.

And I will say they are kinda difficult to handle. Maybe it's my big ol' hands or something, but a cookie spatula or the like would be great for moving them around. Those pretzels just love to slip out from your fingers (and thus ruin your perfectly melted chocolate).

They were pretty good! My husband and I liked the Hugs version the best, and we were split on whether we preferred the Rolos or the Kisses next best (me = Rolos! him = Kisses!).

I think I would still prefer some home made candied pecans, brittle, or cookies instead, but these are good for munching.

Plus, it's the easiness of it all is so very appealing.  And they're festive besides! 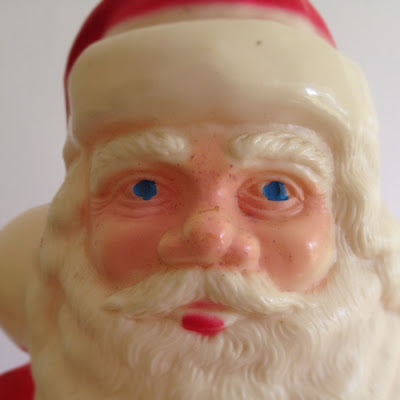 And one needs festive snacks when digging out festive faces such as this one for the year.  So!  Excited! For! Tree time! 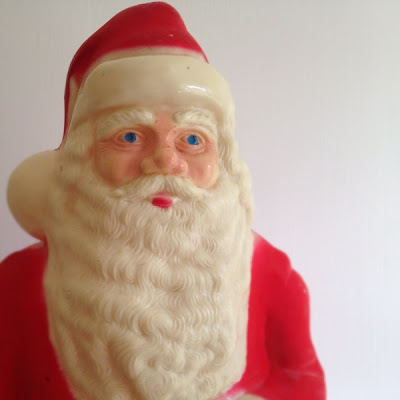 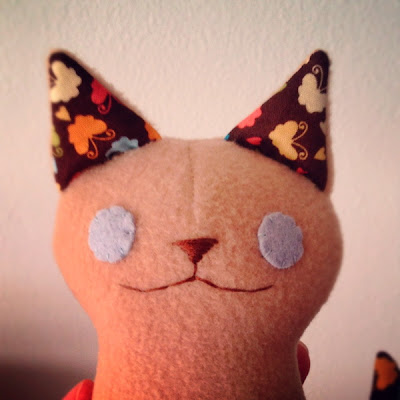 I know, I know, everyone and their mother makes cat softies. Ho-hum!

However, for a person such as myself, who really does love cats, it's kinda been painful to not have an official Alicia Policia cat plush of my own design.

Over the past few years, I've drawn up and sewn up many prototypical cat softies, but none were ever to my liking. They were too intricate, too blobby, too slim, too time consuming, and too not-just-right.

But I have to say, I'm really liking the latest cat softie incarnation. It's simple and sweet, colorful and cute. I like it! I like it enough that I went past the prototype phase and started making more of them.

The above is my favorite (could be that it reminds me of my childhood siamese cats, perhaps). I think I'll keep her for myself. 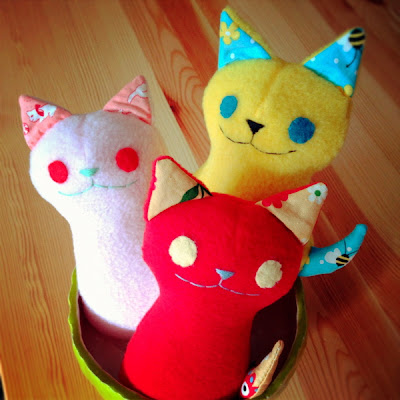 And here are some of her litter mates (my apologies for the crap photos, but a girl is busy these days!).

So, I'm psyched to finally have a plush of my very own pattern to represent my favorite animal. Hooray for kitties! Cats rule!
Pin It
Posted by alicia policia at Monday, December 03, 2012 No comments:

The Shop Is Open! Also, BEER! 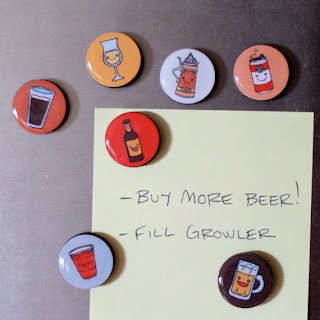 Yay! it's time to celebrate! The new etsy shop is up over at aliciapolicia.etsy.com! 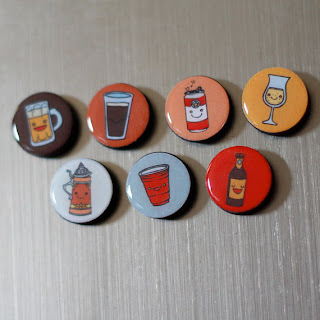 I hope to list even more stuff throughout this week - remember to check back here for shop updates.

As for now, I need to go grab some refreshment. These magnets are making me thirsty!

Pin It
Posted by alicia policia at Saturday, December 01, 2012 No comments: