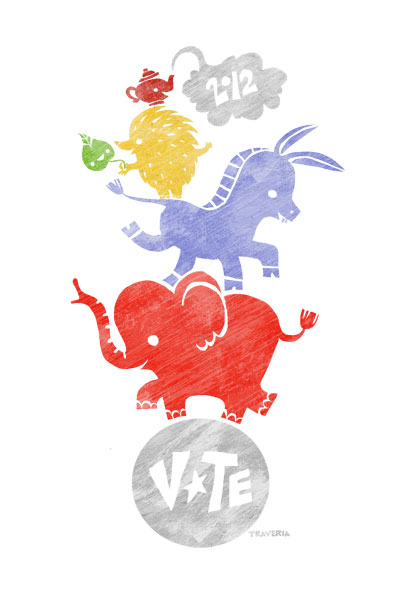 Election Day is almost over (actually, by the time this posts, it may be over already in some states on the East Coast...), which means if you haven't already done so, please go vote!

I hope you vote for whomever you feel best represents your beliefs of how this country should be, be they a candidate from the Republican, Democratic, Libertarian, Green, or Tea Party (all pictured above).

Or if none of those will suffice, write in your vote. That's what voting is for.

Also, every vote (and I do mean every vote) counts!

Just wanted to add a note to say that not knowing offhand what the mascots for the Libertarian, Green, and Tea parties were, I did some research:

• The Libertarian Party's official color is gold, and the official mascot is the Statue of Liberty, but some folks also use a porcupine, which is cuter and more in keeping with animal mascots, so I opted for the latter.

• The Green Party does not have an official mascot, so I went with a leaf, because why not?

• Likewise for the Tea Party. I went for the obvious: a teapot.
Pin It
Posted by alicia policia at Tuesday, November 06, 2012