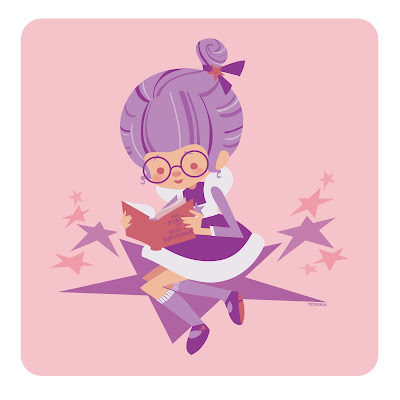 I don't know why it is always late on a Thursday afternoon that I get a hankering to check out the theme for that week's Illustration Friday, but for some reason, that's what I always end up doing.

Usually that means I end up missing out on that week because there is not enough time for me to get something done between finding out the theme and making the deadline.

I was, however, able to crank something out right quick for this week's theme of "shy."

Being a girl child of the 80's means that my brain associates the word "shy" with the Rainbow Brite character of Shy Violet. So that's what I did!

She was my favorite color kid, incidentally, namely because she was the nerdy one. The nerdy cartoon characters were always my favorites it seems: Donatello, Lisa Simpson, Simon the Chipmunk, and even his female nerd counterpart of Jeanette the Chipette were all preferable to their "cool" friends and siblings.

But not Brainy Smurf.  He wasn't nerdy.  He was just annoying. Go smurf a hike, Brainy.

Pin It
Posted by alicia policia at Friday, November 09, 2012