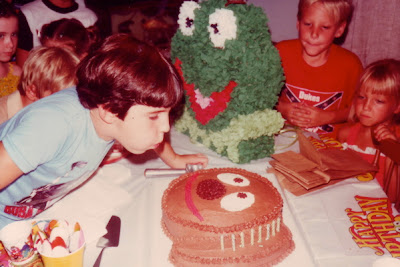 Lookie what I found on my trip back home*: more pictures of my brother's inspirational, celebrational, Muppetational birthday party from over 30 years ago.

And this time you get to see the rad Rowlf cake my mama made!

I totally wish I had been there for this party. Sigh. Well, I guess I was. Kinda. I was born a month later. Juuuuuuust missed it! 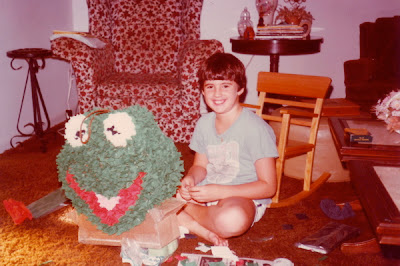 I had posted a glimpse of his Kermit piñata back when I wrote up the tutorial on how to make a Kermit the Frog piñata, but THESE were the pictures I remembered and wanted to post the most – the ones showing my then eight year old brother working on the piñata himself, and the shot including the wonderful Rowlf cake.

Alas, they were hidden amongst the family photo albums back at my parents'.

But now I have them. Hooray for scanning old photos! 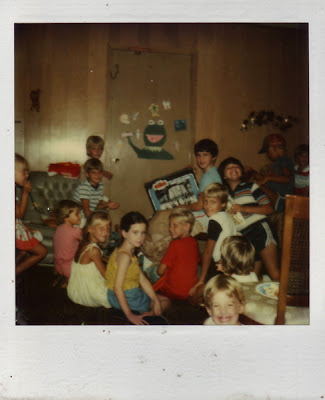 I even found a polaroid that shows the Muppet decorations he drew and put on the back of the door.

Also, bonus points to this picture for its Star Wars content.

Now if I could only find every picture of every other cake and party and piñata that my mom ever made... I see more photo scanning trips to Florida in my future.

*"So that's where she's been!" says the person who's noticed there hasn't been a blog update in a while

This is amazing. So amazing that I've posted it on a friends FB wall for *HER* birthday because she'd absolutely 100% appreciate it. I just wanted to let you know, since it's a personal family photo and all. Hope that's okay - and seriously. Kudos to your momma on a rad birthday party. <3