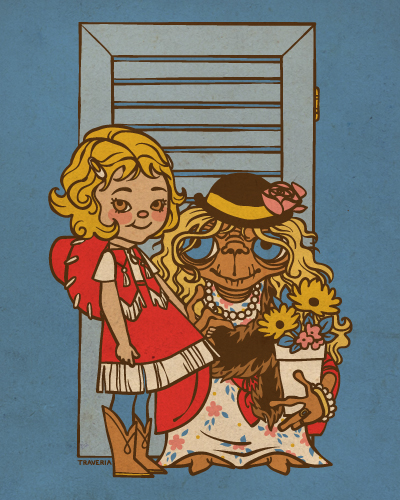 Sure, there was the whole 'Kids V. Adults' thing, but there was also candy! And Star Wars references! And casual swears! Of course kids loved it.

And E.T. was also an especially special film for me, personally, because it is the first film I can remember going to see in a theater.

I saw it with my brother and my grandparents, and I remember being absolutely TERRIFIED. Specifically during the cornfield scene. And the whole E.T. turns white and is getting eaten by a raccoon in a ditch scene. And, oh lord, the frog scene!

Actually, now that I think about it, I think E.T. might be partially responsible for my ranidaphobia... 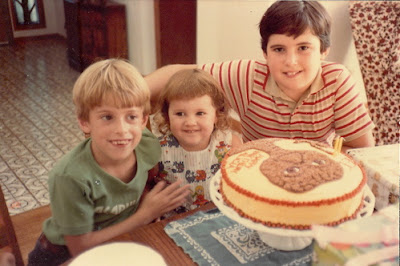 My mama made this most excellent E.T. cake for my second birthday!

But I also remember loving it, too.  My whole family did. We went to see it for rereleases, we had the board game, the Atari game, t-shirts, figurines...my mom sewed up an E.T. costume for my older brother and even years later it was enthusiastically worn again by my little brother.

E.T. even made an appearance on my second birthday cake come September of 1982.

So today, for E.T's birthday, I drew up the Gertie and E.T. up above.

I remember really being into E.T. while growing up in part because it had a little girl in it ("Look, she has toys I have and does things I do!" thought little Alicia) with two older brothers just about my brothers' ages, too ("Look, her brothers have toys my brothers have! And they do what my brothers do!").

I totally identified with the older brothers/little annoying loudmouth sister dynamic, even at a very young age. I liked to think I was a bizarro Gert living an alien-free life in a divorce-free home with my adventurous older brothers.

Except all the blondes were brunette and all the brunettes were blonde in my life.

Anyway, that's why I chose to pay tribute to Gertie and E.T. instead of the usual Elliott and E.T. relationship.

E.T. came to our home for Halloween in '82, with and without his head, and then showed up again later for another brother. Mama made the costume.


Last night I had the chance to catch a screening of a lovely 35 mm print of E.T. at the Alamo Drafthouse as part of their Summer of '82 series, and it was a total pleasure. If you live in Austin, definitely go catch it. It's great to get to see it in its big screen glory again.

The only difference is that 30 years later I find myself going, "Wait?  Why is there a corn field next to their fancy California suburban houses?"

But I promise you, that was the only time I let my adult-sized cynic's brain take over.

Hi Alicia
my wife is trying to host a couple of birthday parties for our kids. My oldest son is wanting ET. I saw your birthday cake but do you have any other party suggestions?
Our two toddlers are wanting a muppets theme &to I found your blogs for the muppets baby shower. I was super impressed with the name cards you made to label the food. Would you please share your creative wizard on how exactly you made them especially the design?
Any suggestions & help much appreciated.