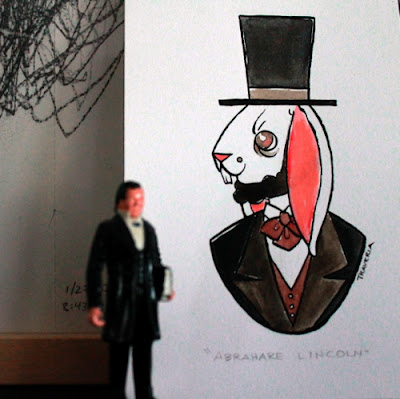 Somewhere along the line, I got into the habit of drawing rabbits as presidents. I don't remember how it started, or why, but it's something I've been doing for over a decade now.

What's important though is that I remembered to share a couple of them with you today in celebration of Presidents' Day (Presidents Day? President's Day? I'm going to go with plural possessive, as it makes the most sense to me).

Above is an ink and watercolor Abrahare Lincoln (accompanied by President James K. Polk). I think little Abrahare is pretty cute. 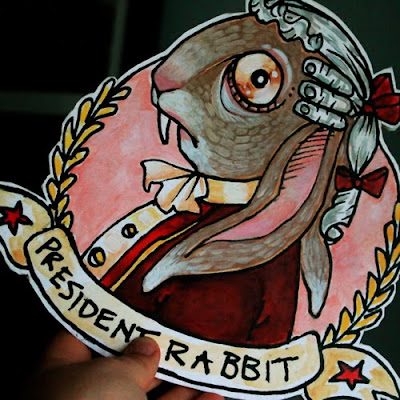 But not as cute as this guy.

I do remember that I made this President Rabbit painting back in college. I'm pretty fond of him. I think it's his wig and his crazed rabbit stare.

I also just like how he's painted. He reminds me that I really need to start painting again. 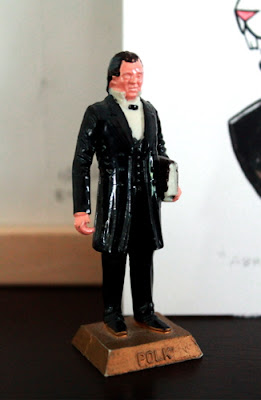 And then there's this guy, who is not a rabbit, but who fits in with the theme of presidents. He happens to have a funny little story, too.

I picked him up at the Syracuse flea market long ago only to discover, years later, whilst putting him on display in our little kitchen curio shelf, that my husband had the exact same Polk figurine as a child.

Except in my husband's case, he received his figurine at school, but he no longer had it...

Because and he took his little James K. Polk home to commit figurine torture (as many grade school boys are likely to do when presented with a boring figurine of a not-very-well-known president), and pocket-sized Polk was consequently destroyed.

The lesson is this: Don't ruin your cheap, little, obscure, presidential figurine, because some day you might just be able to sell it to someone else at a flea market for as much as a dime.

Learn your presidents, kids! Pin It
Posted by alicia policia at Monday, February 20, 2012