Interestingly enough, I am more excited about this year than previous years, having just recently confirmed my distant Irishness while working on our family tree with my mama. I guess now that I know that it's there for sure that it's more fun to celebrate.

So when I saw these super cute flower shaped lemon meringues in the back the latest Martha Stewart Living, a light bulb went off, and I was determined to make my own greened up version for St. Patrick's Day -- it's definitely a minimally Irish dessert, but then I'm minimally Irish myself, so there you go. 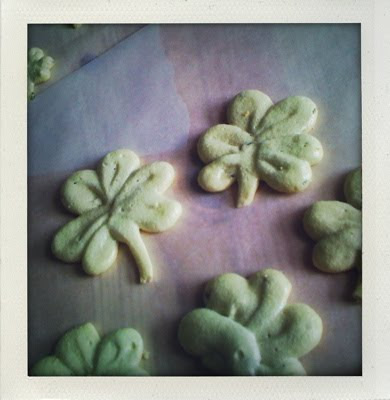 And so I whipped up some meringues using freshly chopped mint (I wanted to use peppermint extract after seeing the posts about peppermint milkshakes and whatnot lately, but not having any on hand, I opted for fresh mint), piped them out in the shape of shamrocks, and baked them up.

They turned out being only ever the slightest bit green (and yes, on the flat side), but that's all right because they were still super cute! 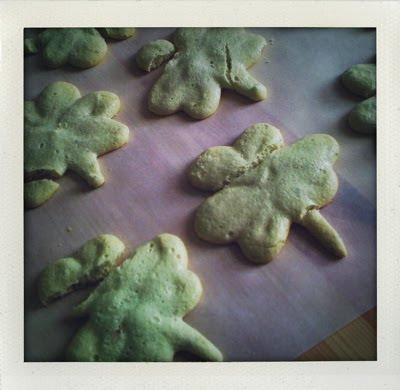 So yeah, the smaller the shamrock, the less likely it'll break. I learned that. That, and don't pick favorites before you've removed everything from the parchment paper.

I also learned that I am not so into fresh mint in anything other than say, a mojito (and that's a cultural beverage from the OTHER side of my family tree -- not an Irish branch, fer shure). I think I would've definitely preferred using that peppermint extract and a smidge of green food coloring were I to do it again. They just weren't what I wanted (though that didn't stop me from still eating some). Sigh!

However, my husband scarfed them down.

What can I say? He has fancier tastes than I (what with my food coloring and whatnot). That, and perhaps his propensity for shamrock-shaped things denotes a higher percentage Irishness than my own... Or maybe he just like food. Pin It
Posted by alicia policia at Wednesday, March 16, 2011

Oh my God this looks so good and i`m sure that it is delicious too. I think that this is a easy recipe so i will give it a try, thanks a lot for sharing.