King Cake! (and a happy Mardi Gras to you) 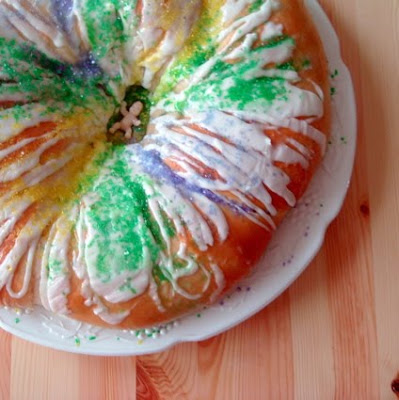 I usually don't ever do much for Mardi Gras. Actually, I don't think I've ever done ANYTHING for Mardi Gras. It's just not a holiday we've ever really observed with much to-do or fanfare.

Perhaps that's why I got this mega hankering to make a king cake yesterday afternoon. I had to do SOMETHING for once! Plus, it's been a while since I've baked anything. I missed much of the holiday fun of Valentine's Day. And making a king cake from scratch sounded like a pretty perfect solution. 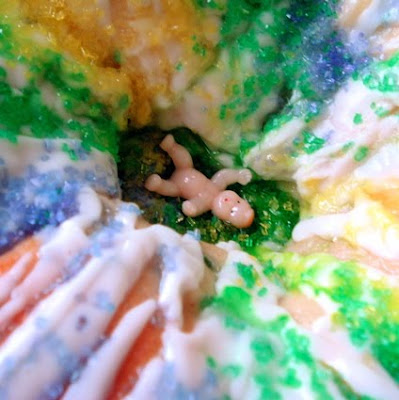 If you're not familiar with King Cake, here in the States, it's a Louisiana tradition for Mardi Gras, hence the trademark yellow, purple, and green colored sprinkles.

You often find king cakes for sale here in the Southern half of the U.S. before Mardi Gras -- allbeit these cakes in the grocery stores, I have never found them appealing or tasty. They usually look (and taste) a hot mess.

The cake itself is basically a yeasty, bread like dough (kind of like a cinnamon bun dough, actually) filled with either cream cheese or something else sweet, sugary, or savory -- like a cinnamon or praline filling.

And most importantly, a little baby figurine gets baked into the cake! Whoever gets the slice with the baby in it buys next years cake. Unless they're friends with me, in which case, I'll probably bake one every year anyway... 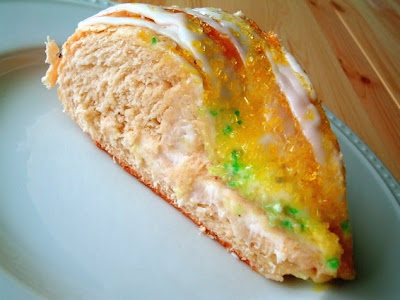 Upon the advice of my circle of friends' resident Acadian and Louisiana native, Kristin, I made my cake with cream cheese filling and the large sugar crystals on top. Yum! And it was good. Very good. Thanks, Kristin!

There is a baby baked into my cake somewhere, but the size and shape of the center of the ring just screamed out for a second, superfluous, decorative baby to nestle in it. 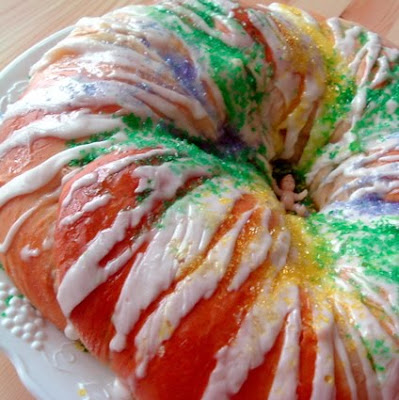 There he is, in a mountanous bed of ooey-gooey, bready king cake!

I used a combination of sorts of this recipe (credited to Emeril Lagasse, but oddly different from other king cake recipes credited to him elsewhere), and this one, which was the most glowingest reviewed one I found in my super quick recipe search.

I don't think it was too terribly involved. It just takes some time. But you could probably make your own far less involved King Cake with pre-packaged dough and cream cheese icing for filling.

I just happen to really enjoy the long and sometimes frustrating process of baking from scratch. Because I'm a glutton for punishment.

And just a plain old glutton, too. But I reckon that's what Mardi Gras is all about, Charlie Brown!

Mmmm...indulgence. Pin It
Posted by alicia policia at Tuesday, March 08, 2011

oh my this looks delicious.