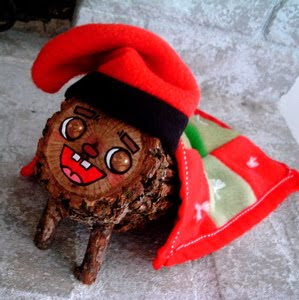 Tonight is Christmas Eve, which means in my family, it's Noche Buena!
We Traverias do the whole Cuban and Spanish dinner celebration thing, which means we stuff ourselves with roast pork, black beans and rice, platanos maduros (ripe sweet plantains), yuca with mojo (a starchy root with a tangy lemon garlic sauce), Cuban bread, natilla (a pudding-y custardish dessert), Spanish sidra (sparkling hard cider from the north of Spain), and turrones (Spanish almond candies).
It is an unbelievably delicious night!
What with all these Spanish traditions and customs having survived the transition from Spain to the new world (I reckon it wasn't too terribly long of a jog, at least one of my great-grandfathers was Spanish...), I was a bit sad that one Catalonian Christmas tradition didn't make its way over with the turrones.
I'm talking about Caga Tió (or the Tió de Nadal) of course! Everyone's favorite sweets-pooping log! 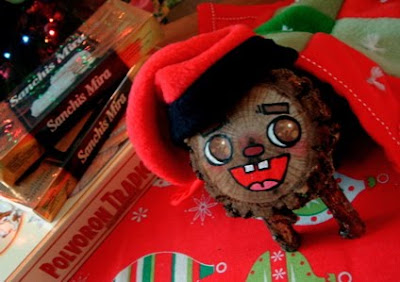 I know, I know, it's like Mister Hankey from South Park and Log from Ren & Stimpy had a baby in Barcelona...
In Catalunya, children get to beat this cute log man with a stick and demand that he poop candies. His blanket helps keep him warm and is removed, when he is finished being beaten and sung to, to 'magically' reveal his somewhat disgusting but absolutely hilarious (in my opinion) treats and gifties!
I am of the opinion that it sounds far more disgusting than it is. Looks pretty fun and benign to me!
So, once I discovered that Caga Tió existed, I was eager to reclaim my Catalonian roots (the Traverias being from Catalunya originally) and make him a part of my Christmas tradition.
Although, let me tell you, when I told my mother about him, she was mortified. Mortified! She wants no part of Caga Tió. At. All.
But then, she's the non-Latin one in the family, so perhaps the rest of us think it's hilarious because the toilet humor is in our blood. Or maybe it's just me who has the disgusting sense of humor... I mean, we already eat turrones, right? Why not pretend that a cute little log pooped them out for us when we beat him with a stick?
Cute + Christmas + candy + caca jokes + mild violence = right up my alley!
Yeah, I know, I know. I DO have a sick little sense of humor. I'm sorry! 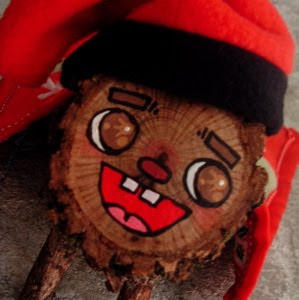 How can you not love that face?!?!
And even if we don't beat him with a stick to get at his sweets, he makes a right cute Christmas decor addition with his cozy little blanket, snuggled up to the hearth. No candy caca necessary.
And so, I went about making my own Caga Tió (Tió here being Catalan for 'log,' and NOT the Spanish word 'tío' meaning 'uncle') with a piece of firewood, some craft paint, and some fleece.
I chose a log that was just right in size and shape, painted on his super cute smiling face, and stitched up his barretina hat and a cozy little traditional blanket (a patchwork first for me!). It really took a lot less time than I thought it would.
I have to say, I am ecstatic with the results! Who'd ever think a log could be cute? I reckon a face and a little quilt can cute-up just about anything!
So tonight, after much stuffing ourselves with pork and many traditional Cuban starches, maybe we'll sidle up to Caga Tió and see what he's left us. Or if that turns too many stomachs, we'll just have a cute little log man by the fire.
And if my mom doesn't like it, well, I'll just forget about telling her about the Caganer...
Merry Christmas Eve and Noche Buena, everyone!
Pin It
Posted by alicia policia at Friday, December 24, 2010

Your log friend is so cute/hilarious, I want to adopt the tradition as well and it's not even in my heritage!

Awesome! My personal mission in life is to inundate American Christmas culture with Caga Tiós!