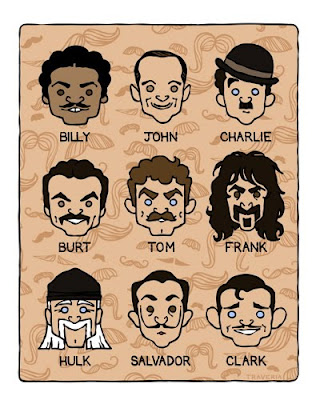 We are literally just hours away from the end of November, or rather Movember, the term given to the month of the year where folks grow the most attractive of facial hair forms (usually, or at least in my opinion it is) in an effort to raise awareness for prostate cancer and other men's health issues.

So a few weeks ago, I thought of combining some of my favorite famous moustaches together in one moustache-marvelous illustration. I will never turn down an opportunity to research and draw Clark Gable, after all.

And now, so much quickly flown by tiume later, as a true believer of better late than never, here's my Movember inspired moustachioed piece.

It was the working on Alicia-fying so many famous folks's faces that kept me from finishing it in a more timely fashion. I was determined to finish and post it tonight though, as opposed to let it sit unfinished until next November or to post it in December or such. So there you have it.

Besides, having had many loved ones in my own life affected by issues such as prostate cancer, I believe every and any month of the year is a good month to donate and support charities such as the Prostate Cancer Foundation, Livestrong, and the American Cancer Society, moustache or not. Right?

Right! Pin It
Posted by alicia policia at Tuesday, November 30, 2010