Monster in the Family 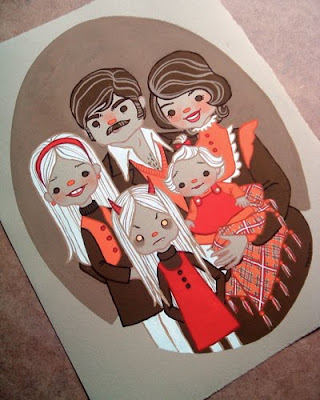 There's one in every family, right?

The annual Domy Books Monster Show is opening on Saturday, and I'm pleased as punch to be a part of it again (I skipped out on it last year because of wedding and honeymoon induced lack-of-time, but I'm back, baby!) . This is my piece this time around, and it's gouache on Rives BFK and titled 'One in Five'. And I love it! It was a lot of fun. 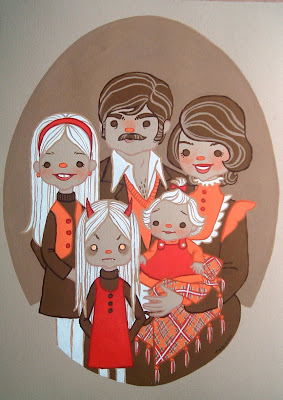 You can go check it out in the flesh at the big ol' opening this Saturday evening. I took a peek at the artwork submitted for the show this year when I was dropping off my piece, and man-oh-man! There is some GOOD stuff there. Incredible work!

So if you're in Austin, make sure to monster-up this weekend. That's Saturday at Domy Books, 7-9pm! Be there or be scared (see what I did there?). And if you can't make it, be sure to check out the show (and the awesomeness of Domy in general) at some point during the next month while its up! 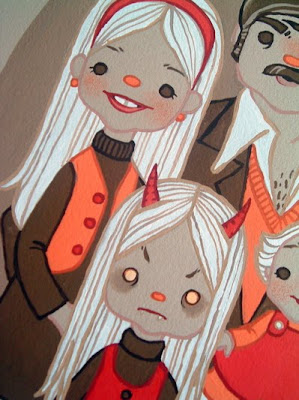 I don't know what it is, but all while working on it, I'd look at the two older girls and think to myself how they totally capture the epitome of the whole 'sister' thing to me.

Perhaps being an 'all brothers' gal or being the only daughter of an only daughter that has given me a skewed view of the sister-sister relationship. Maybe I've watched a little bit too much Brady Bunch.

But I just look at these girls and I think to myself. "Yep! That's totally 'sisters!'" 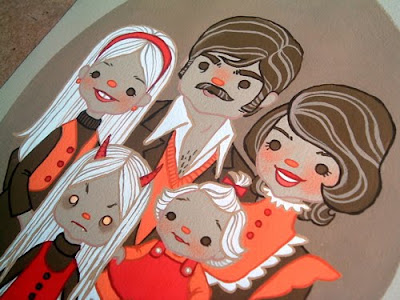 And speaking of the Brady Bunch -- the color palette on this one? Yes, it was absolutely inspired by the Brady's kitchen and all of its orange and brown glory. 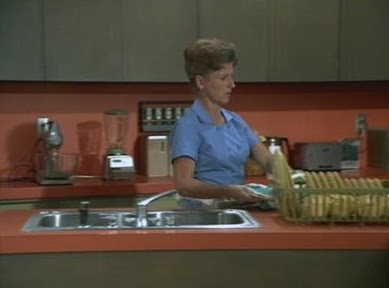 Aaaah, orange formica, monstrous and styling at once -- perfection! Pin It
Posted by alicia policia at Tuesday, October 26, 2010

I LOVE that illustration!

This is awesome! I won't make it to Austin until Sunday but I'm so glad I'll get to see this great piece!