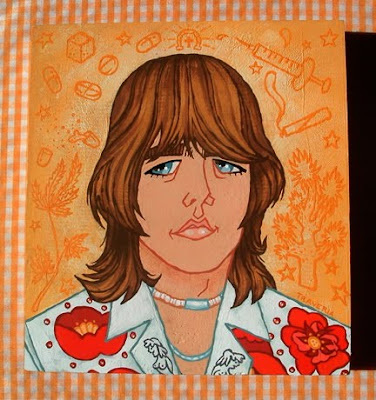 Back when I painted my Michael Jackson portrait, I had such a nice time painting whilst listening to my subject's music that I thought it might be nice to have a little dead-musicians-of-whom-I'm-very-fond-and-who-I-would-like-to-paint series of portraits.

And so, I made up a list (a very loooong one -- we'll see if I can make it through them all), and decided that my next one should be of Gram Parsons. The finished portrait is acrylic gouache on wood, and if you're curious about some of the imagery surrounding him, take a look at his wonderfully famous Nudie suit. It's pretty crazy, awesome (aren't ALL Nudie suits?), and eerie.

Not only was I eager to paint his pretty poppy covered jacket, but Gram and I have a connection of sorts. Or at least I have interesting story as to how I discovered his music.... 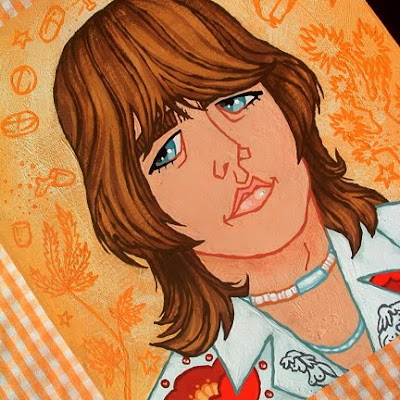 You see, once upon a time, I went to the same school Gram Parsons went to, albeit at a different time (poor Gram was long dead before I was born). At the time I heard the rumor that he had attended the school but was "not very proudly claimed as a famous alumnus because of the whole 'died of a drug overdose in the desert' bit'", I had no idea who Gram Parsons was.

And so, for a while, I thought they meant that the dude who started up the Alan Parsons Project (you know, Alan Parsons...) once went to my school. Yeah...

Boy, was I off! Like, not-even-the-same-country OFF. What can I say? I was young, and I did still have my music blinders on at the time.

Of course, I would embarrassingly spout off this erroneous rumor that Alan Parsons went to this school to everyone, until I told a friend who knew better, and who introduced me to Gram's music.

I'm so very glad I was schooled on Gram Parsons v. Alan Parsons, because despite Gram's life story being incredibly tragic, his music is simply beautiful perfection. Gorgeous!

I like it far, far better than the Alan Parsons Project (sorry, Alan). 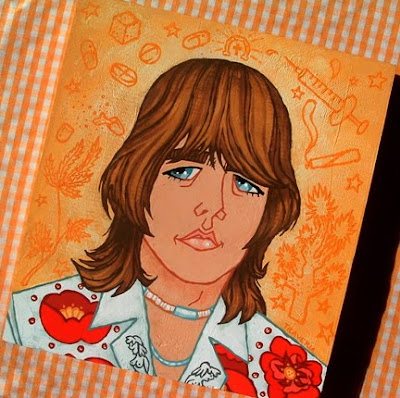 Pin It
Posted by alicia policia at Thursday, October 14, 2010

Love it! I'm so glad you had a CD to listen to while you painted. :D

I had to comment because I went to the same elementary school as Michael Jackson. Crazy!

I am also going to stalk your blog now even though I see you in person. Mwuahahahaha.

I was stumbling around the Blue Genie Xmas Art Bazaar the other night when I found myself face to face with your inspired rendition of good old Gram just as the Stones' "Dead Flowers" began to play on the PA. Good timing, eh? Had to drop by and let you know about the cosmic american music synchronicity.