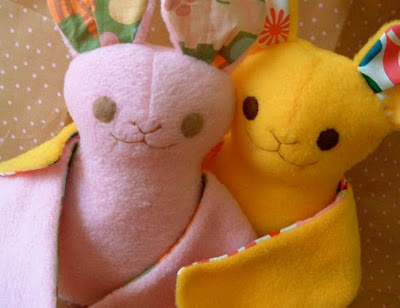 In the past year, October has become the official month of nieces! With one celebrating her first birthday, and one due for arrival any time now, I decided bats were particularly good birthday and birth-date presents for them both.

After all, it is the month of all things spooky, creepy, and crawly, and bats are definitely a symbol of the spooky. Nieces, not so much spooky or creepy, but in the case of the one year old, definitely crawly (and walky)! 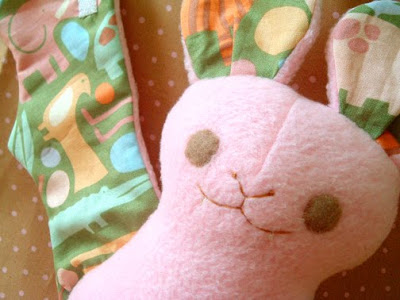 Besides, I had made a more baby-friendly bat for my oldest niece on the occasion of her first birthday, and a tradition was established.

But I wanted to make the bats more all-over cute and less seasonal, so I nixed any Halloween aspirations and went with some cute Alexander Henry 2D Zoo fabric for each one instead.

The pink one is for the littlest niece (please excuse the wrinkled and non-pressed ears and wings!), and is meant to compliment the soft colors of her nursery. The yellow one's cheerful coloration is a bit bolder and brighter and is an exact match for her sister's bat (although hers has a different body color). 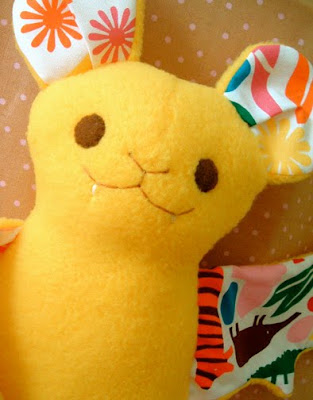 I made them a bit friendlier to little ones (although they still may have to bide some time on the shelf for the littlest niece) by giving them felt eyes and velcro tabbed wings as opposed to the traditional safety eyes and metal snaps on my standard bats.

They are a smidge chubbier, and have bigger ears as well -- perfect for playing bat peek-a-boo!

And so there they are, two October bats for two October babies...unless the one decides to take her sweet time and arrive in November. In which case, hooray for bats for all seasons! 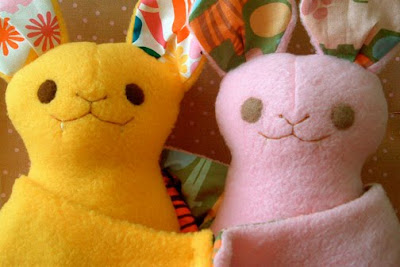