This Monkey's Gone to Heaven 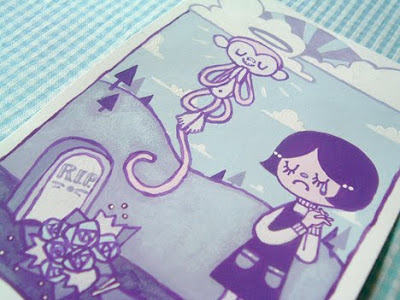 To me, the Pixies are the music of fall.

See, every year when fall is on the doorstep (and the door officially opens tomorrow) and the air begins to get cooler, the nights begin to get longer, and awesomely fresh and delicious apples begin to flood the market, my mind transports to my college days and I envelop myself in a college music time warp and relish the nostalgia.

This was the soundtrack to my freshman (and some of sophomore) year (well, a fraction of the soundtrack, but the ones that really transport me anyway), and just hearing it makes me feel the fall wind on my face as I walk downtown to The Sound Garden to pick up whatever two dollar used CDs I could find. And then I would listen to the new albums as I worked on art into the wee hours of the morning, stopping only for a weekend break at an apple festival, or some crazy art people party with strange and surreal costumes involved. 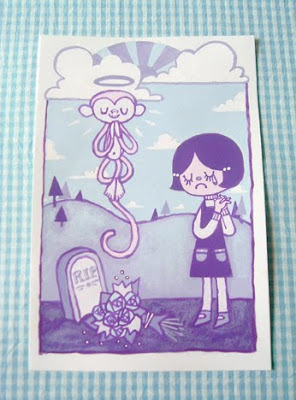 To sooth my longing for a crisp, cool fall full of lovely leaf colors, apple festivals, and strange parties (not getting much of any those here soon), I've at least been good on reliving the listening-to-some-Alician-college-music and working-on-art-into-the-wee-hours part of things.

Although this time around the art is doodling around with gouache and illustrating lyrics to songs with inappropriately and exceedingly cute characters.

Like the inappropriately cute 'Monkey Gone to Heaven' by the Pixies artwork in this post! Who would think a dead monkey could be so cute!

Which reminds me, the Pixies are stopping in Austin tonight on their Doolittle tour. I hear tell that Pavement and Guided By Voices are stopping by next week, too. Hmmm...

All these bands I used to listen to that broke up are now reunited and are playing in my town at the beginning of fall which can only mean...Hooray! The entire world bends to my nostalgic whims!

Now I'm going to go eat an apple and gouache doodle some more. And maybe come up with a bizarre costume plan just in case nostalgia prompts someone to invite me to a party... Pin It
Posted by alicia policia at Tuesday, September 21, 2010