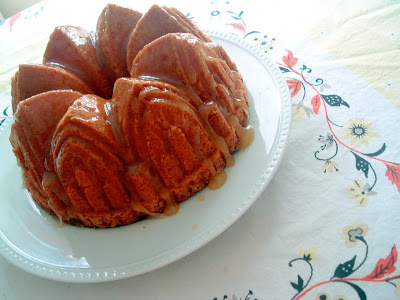 Failure! It haunts my days of late. Wretched failure flustered frustration! Bah!
See this orange juice cake up here? Maybe you think it looks good. And sure, the cake tastes incredible...but the glaze. The glaze!
It's like having rock solid lemon drops poured all over your beautiful perfect family recipe cake. And when you try to cut into it, this happens... 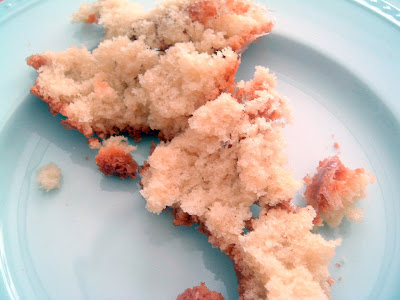 ...Yep, the glaze candy shell had to be ripped through, as it was too resilient to cutting. So sad!
The past few weeks have been a lot of trial and error and failure and trying again and starting over round here. Frustrating projects, details that aren't just right. Huff!
And so when it's visiting family members season and I feel like making some of Gammon's Orange Juice Cake (a family favorite) in celebration, it should be Relaxation (and NOT Frustration) Central. I've done it so many times before, right? Easy peas-y.
But never have I made it before with a new cast aluminum bundt cake pan, which turns the original recipe's baking time temperature into a burny inferno. I thought I was in the clear because my oven and previous pan combo turned out a stunning cake with the exact same time and temp. Stupid Alicia! *weep* 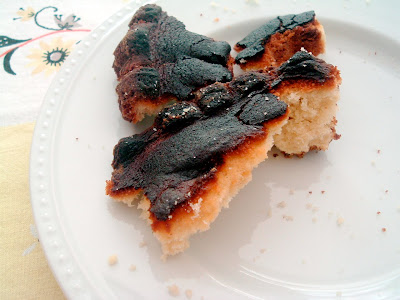 Ok, second try! Cake turned out beautifully perfect this time, let's add a glaze! I've never made it with a glaze, but how can I go wrong? I mean, I can DO cakes! Besides, Gammon didn't do the glaze thing often, and when she did, it was just about different every time. Big deal!
It was a chain of impatient stupidity, as I tried substituing powdered sugar with my own 'powdered' granulated sugar, followed by not having enough milk, and then cooking it far too long at far too high a temperature. Why do I always do that?
Sigh. I'm a fool.
Even the cat was laughing at me. 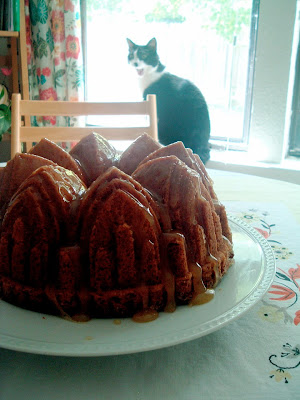 Well, at least this last time I figured out the perfect temperature and time for my new pan, right? Right...
What's that they say, third times a charm? Pobody's nerfect? Either will do, I reckon.
And at least some of my favorite pre-Disney Florida friends were around to cheer up my photos of the Floridian family favorite food gone failure. 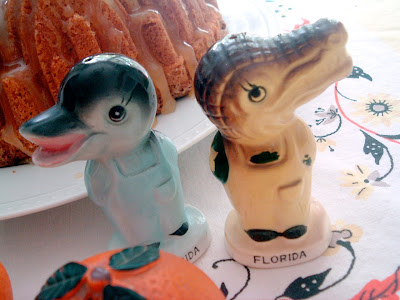 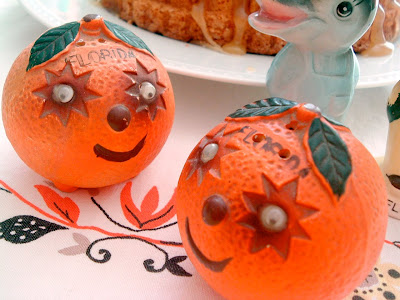 Here's to trying, yet again.
Pin It
Posted by alicia policia at Tuesday, August 10, 2010

You can do it, Alicia! I believe in you talent and your never ending quest for all things right! Be patient, it will come to you and when it does it will be awesome!
xo,
Lynly
p.s. I would totally eat the "FAIL" cake.

Everytime I see those oranges this is all I can think about. http://www.youtube.com/watch?v=Z8TqOTe3ODc