Hoot Do You Love? 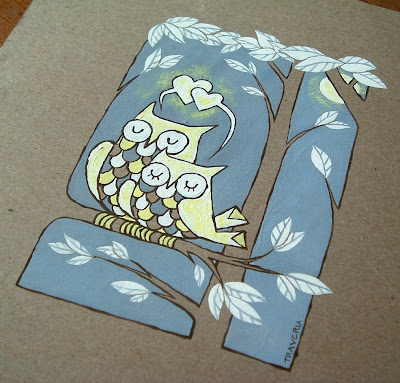 Hope everyone had a wonderful and lovely Fourth of july weekend. I surely did, and now the fun is over and it's back to work, Bruce!*

In my family, the Fourth of July weekend isn't just a big deal because it's the anniversary of our country's independence. It also happens to be my parents' wedding anniversary weekend (39 years!)...

...And the weekend of my first date with my husband (six years ago now)...

...And the weekend of the anniversary of our engagement (two years ago now)...

...And it's only one weekend before my brother and sister-in-law's wedding anniversary, so that kinda counts, right?

Have I ever mentioned that I am a SUPER WIZARD when it comes to remembering dates? Seriously. I remember just about everyone's birth date. Anniversaries. The day my cat died in 1994 (March 3rd, by the way).

Anyway, so I reckon you could say that I was more inspired by the anniversaries a-go-go going on than the stars and stripes, because I ended up painting up some lovey-dovey owls all nestled in a tree. Awww!

They're even surrounded by 39 leaves, in honor of my parents' 39 years together. Awww, again!

Here's to anniversaries of good things, be they weddings, first dates, or that time that we declared our independence from England. All good things!

*No one ever gets this quote unless they worked on A Scanner Darkly or are Philip K. Dick, obsessed, but hey, it's been ingrained into my everyday vernacular now. Pin It
Posted by alicia policia at Tuesday, July 06, 2010

We do think that you too might have a marvelous story to tell, one that is your own! So if you can compose it in not more than few words, we would want to hear from you. Also, you stand a chance to get your story published on our site and win cash prize of USD 100.

“Then what are you waiting for? …put on your thinking cap and get writing. For registration and other information check - http://bit.ly/d4c3Bz