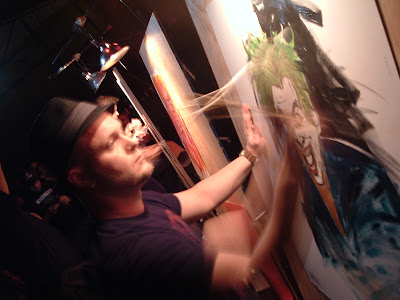 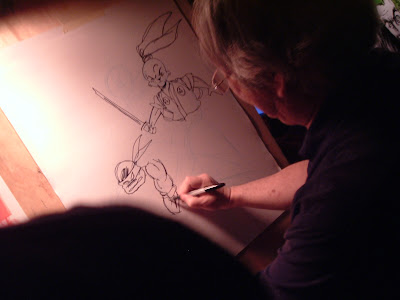 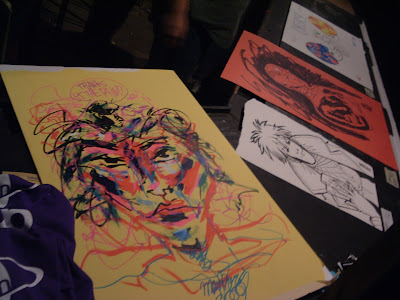 The STAPLE! Independent Media Expo and its live art after-party at Red7 was this past weekend.  I went to both, and I larted!  At least that's what my friend dubbed it ( 'lart' being short for 'live art').  I like that, and it's easier to type out and put into verb form than 'live art' so I'm sticking with lart. If I were to sing my own version of the 'La-la-la Song' from Sesame Street, I'd stick lart in there for sure.
Whatever you call it, it was great and inspiring and fun and entertaining all at once. I met a lot of tremendously cool, kind, and talented people and helped raise some money for KOOP Radio. Yay! I was also wishing very much to have a newer better camera that rocks at high movement and low lighting situations.  No such luck on the wish fulfillment, though.
Above are some pics from the event, including Brent Peeples at work on a Joker, Stan Sakai inkin' up some Usagi, and some of the products of all the lartin' goin' on.  Below is snippet of my own piece (most of those photos came out super blurry).  It involved cats, a beehive hair do, a naked lady, and cats. Very Alician. More pics over on my flickr.
I'm off to work some more whilst singing 'The La-la-la Song' now.  Ahh, Joe Raposo!  You wrote the best songs! 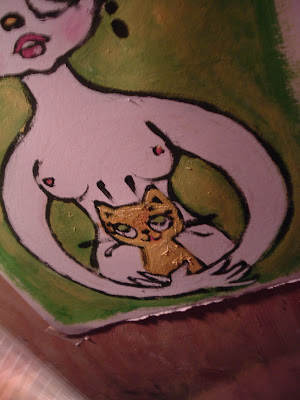 Hi, I come from China, knows you very happily. I had registered this blog newly recently, is very interesting, hoped that can study are more.
My English is not good, therefore I use network translator, sorry.

I randomly came across you website while searching for paintings of the author Flannery O'Connor through google.

You have a painting of her posted in November 2007 and I was curious if you would be interested in either selling a print of that piece? or if you would send me a larger image of it so that I could blow it up myself and frame it for a birthday present.

wow I like your paintings. Keep it up. Nice blog.
http://apps.facebook.com/top_celebrities/ (Vote your favorite celebrity)
http://prabath321.blogspot.com/