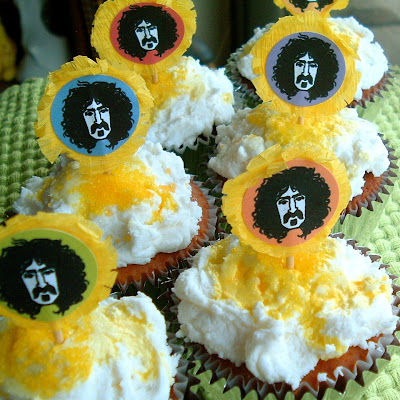 Ladies and gentlemen, for my latest foray into 'unappetizing icing' (see my previous infamous creation: the Tom Selleck cake), I present to you my Frank Zappa Utility Muffins complete with yellow snow!

It's actually just some food coloring and sprinkles on lemon buttercream icing. No bodily fluids were involved.

And for those of you left scratching your heads.... So, it was my sweetie guy's birthday, and he is a big time Frank Zappa fan. Big time. One of Zappa's well known songs is 'Don't Eat the Yellow Snow' of the Nanook of the North song saga. It tells the tale of Nanook the eskimo, his mama, huskies, and yes, yellow snow. 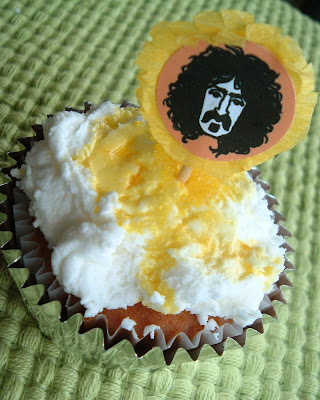 Inspiration struck me when I found myself without the time to bake up a cake shaped like Frank Zappa's head. That's when I thought of making up some Zappa party picks to top off the 'yellow snow' capped cupcakes. Or as our friend, Paul, noted, they should really be called 'Utility Muffins.'

They were also far more portable, so we easily brought them into the pub for snacking. Win! Good thing I didn't carry out the massive Zappa portrait in frosting, then.

I drew up the Frank myself, printed it out on cardstock, circle punched the suckers out, and glued them into a fringed crepe paper and toothpick sandwich. Taa-daa! My friend, Jennifer, even made her own version for her dad's 60th birthday party. Super cute!

And on the baking end, I also doctored some cake mix (I know -- blasphemy! But I had not the time!) into a very lemony cake, and used Amy Sedaris' lemon buttercream icing recipe. Very yummy. Very quick. Very easy. I forgot to remove the paper liners from the foil cups though. Duh! 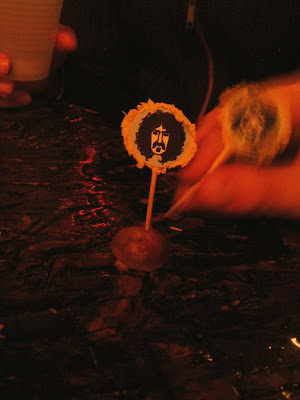 I like to think that both Frank Zappa and Amy Sedaris would get a kick out of urination themed cupcakes, right? At least I'll tell myself that. I know we all enoyed them very much, and most importantly, my sweetie guy was totally surprised and thrilled.

And nobody rubbed them into anybody's eyes. But we did jab the picks into some sausage. Mmmmm! Sausage and cupcakes!

Pin It
Posted by alicia policia at Tuesday, February 24, 2009

Those are amazing cupcakes! What a tribute to Zappa!

I was googling images of Flannery O'Connor and I came across your piece from two years ago.

Could you do another portrait of her or one similar? I'd be willing to pay for your awesome artistic services.

two thumbs up for the most creative cuppycakes ever!

what's next for you?

You are a genius. My husband would LOVE these! Thanks for sharing. They are hilarious.

Oh my gosh, i was just showing a friend your Tom Selleck cake when i spotted these in your flickr. You've managed to combine two things i love, cupcakes and zappa.AWESOME!!

Would have been betta with a little green rozetta, though.

Stealing this image (with attribution) to celebrate Frank's Birthday today. Thanks and Happy Zappadan (google it if you're unfamiliar with the holiday)

I was trying to think of songs with the word 'snow' in the title and thought of Zappa's song. Then I came across your cupcake.

STOP ALREADY. YELLOW SNOW? I FEEL LIKE AN OLD PERSON WITH THE ALL CAPS BUT I CAN'T STOP. THESE PROJECTS ARE SO UNBELIEVABLY AMAZING. AMAZING!!!!!!

It would be nice if one time we can all see Zappa for the great composer he was who parrelled mozart and stravinsky instead of this aberrated buffa comedy music guy.It kills his reputation as a great genius in 20th century composition, amongst the mainstream population.

You just gotta love them!