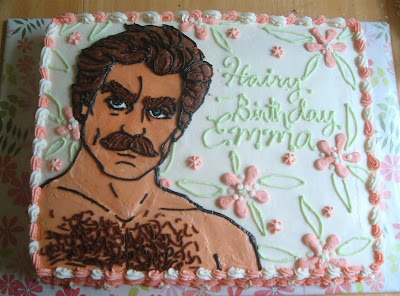 I said I was gonna make a cake, and make a cake, I did! A Tom Selleck cake. My friend, Emma, was having a birthday bash, and seeing as she can't have the real Tom Selleck for a present, I made her this.

In my search for reference pics, I learned that a 'Tom Selleck Cake' refers to an actual kind of cake - usually a gooey chocolate and toffee delicious cake that is apparently 'better than even Tom Selleck' or 'the next best thing to Tom Selleck.'  I can't imagine that could possibly be true. This cake was sour cream pound cake with butter cream icing (and chocolate butter cream icing), made from scratch using my mom's old catering recipes.

I will admit, this cake did not turn out how I envisioned. I initially imagined nipples, a bigger portrait area, and better bordering, lettering, and so on. I found myself running out of time, so the bordering, the lettering, and flowers were tremendously rushed and overall half-assed. Thus, they really bother me to look at.

And, let me say, that chocolate icing was a pain in the butt! It was so stiff -- I should've added that last tablespoon of water that I decided against when mixing it up. It would've made a world of difference. That tube of chocolate icing was really trying its best to give me a melt down and take up all my time. On the bright side, I got to look at shirtless pics of Tom Selleck all the while.... 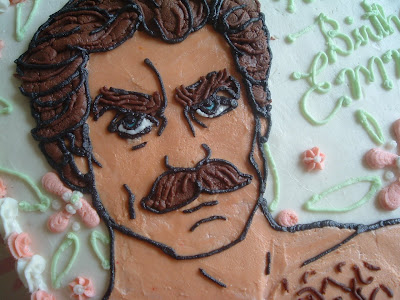 I will say that I have never made a cake that was so well received and complimented (despite its decorative flaws, the blistering hot journey it had to its destination, and all the little things I did not get just right...), and my friend truly did have and happy (and hairy) birthday. I was able to let go of my perfectionista cake 'tude, and we had a blast!

Hope you all enjoy it as much as we did. Any ideas or requests for next year?
Pin It
Posted by alicia policia at Monday, June 30, 2008 57 comments: 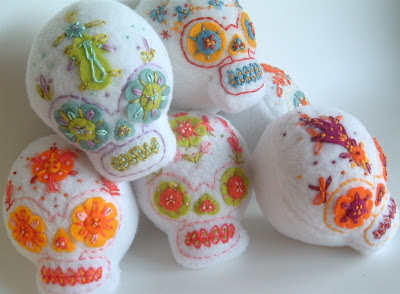 I know this blog has been a bit sugar skull heavy as of late, but I wanted to let folks know that more sugar skull softies have been added to my etsy shop, so there you go! I think most have been snatched up, but there are some still available (as well as some new Gammon mice).

In other news, life is very, very busy, but good. I'll be part of a show coming up soon at Flightpath, my brother is getting married, and an exciting project of mine will soon be revealed. Yay! In the past few weeks I have seen Loretta Lynn in concert, met Gary Panter, attended the Brad Neely special screening featuring Brad Neely (live!), actually spent time with friends (!), had more cacti blooms and their resulting disgusting looking and exciting seed pods, made some awesome art trades, and even more fun and exciting stuff.

Tomorrow I shall make a cake, and swim in the lake. Good times! Pin It
Posted by alicia policia at Thursday, June 26, 2008 3 comments: 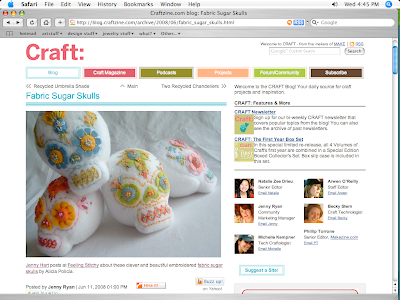 Taking Time to Kick Back and Relax.....

This month's Crafting A Business column by Jenny Hart is up over at venuszine.com, and it's all about making sure to take time off from your business -- a very important and often overlooked part of being an indie crafter and artist. Ahh, time off! I miss you...

I was totally fantasizing about taking time off out-of-doors to laze about reading while I was working on this one. I did manage to get some outdoors time in the past couple of weeks, which was nice. Maybe I'll get some more in this weekend, although I think this weekend will be a 'I must clean the apartment because it is a ridiculous teeting pile of absolute mess and craziness' weekend. Bleh!

At least I can look forward to seeing Loretta Lynn on Friday, before the mass clean up begins. Hooray, Loretta!

p.s. Friday is my one year blog anniversary. Any suggestions for celebrating? (other than seeing Loretta Lynn, of course...) Pin It
Posted by alicia policia at Tuesday, June 10, 2008 2 comments:

Email ThisBlogThis!Share to TwitterShare to FacebookShare to Pinterest
Labels: crafting a business

The Cactus Plants Are Tough on Pants.... 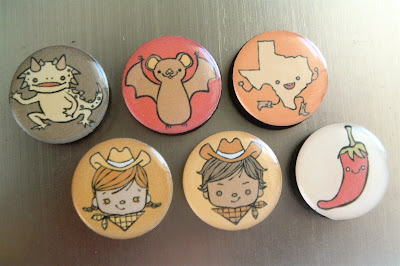 Hey y'all. Here some Texas themed magnets I done did up. I think the dancing state of Texas is my fave one. And the little cowboy. He's super cute. I have some more magnet ideas brewin' which I hope to post sometime soon. We'll see if this heckuva schedule keeps on rollin' like it has been, since that might put new magnet plans on hold.

Also, speaking of cactus plants (which are tough on pants), here's a pic of my googly eye cactus' first bloom. Two of his four buds have now bloomed, and let me tell you, they are even hotter pink in real life than in this photo! Like, retina burning neon pink. And they're huge. I wish they lasted for more than a day though. Phooey! 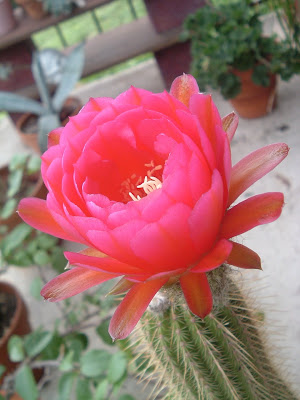 Maybe I should add a cactus or two to the Texas magnets. I do love my cacti. : ) Pin It
Posted by alicia policia at Saturday, June 07, 2008 3 comments: