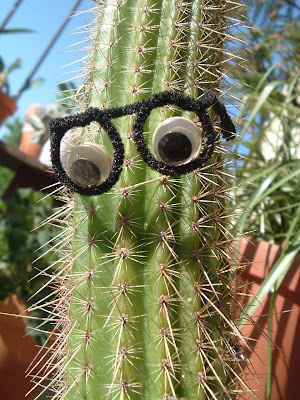 I just wanted to say that before Christopher Walken decided he needed to put googly eyes on all his plants, I put these glasses with googly eyes on one of my cacti. I did so in emulation of my grandmother, Gammon, who had a cactus with glasses and googly eyes in a pot shaped like a VW bug (her car of choice) -- which actually was a gift from my mom. How trendsetting of them!

I'm currently buried in work, work, work, but I decided to post some fluff since it might be a while before I can post some real work up here again. I don't want to keep y'all hangin'! 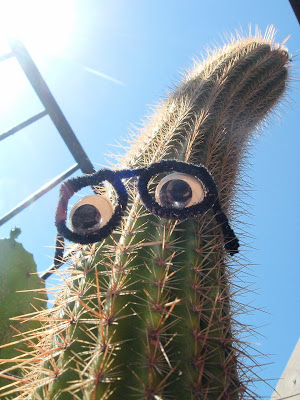 Ahh, the blazing Texas sun! Look how tall Mr. Cactus is getting! He even has four little hats on the top of his head, which I'm very interested in seeing how the look when they bloom. Pin It
Posted by alicia policia at Saturday, May 03, 2008

How sad that this poor little cactus is nearsighted! You could at least give him some sunglasses.;)