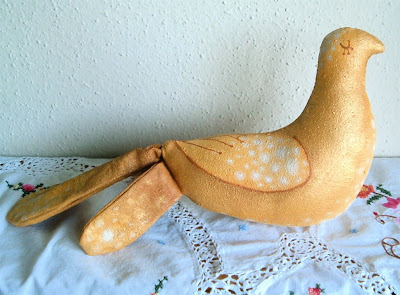 Today's Painted Plush made for Crammed Organisms is The Golden Bird. She's not the most fierce or exciting painted creature -- especially when she's up against wolves and octopi. How can she compete with that? Well, as simple as she may seem, rest assured, she is very, very magical, and that's the ace up her sleeve...or wing, if you will. 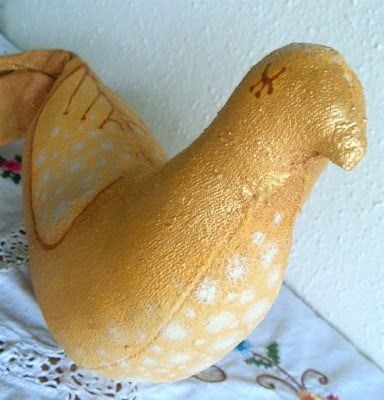 The Golden Bird was inspired by the all-so-frequent fairy tale vehicle of the magical, mystical bird of some sort, who many times is described as 'golden,' and who is usually a coveted key to resolving whatever conflict in which our heroes are tangled. She is the quintessential catalyst.

This piece was originally more painterly, but I found myself very unhappy with the results, and I kept gravitating to this more graphic and uncomplicated painting style. I like that it looks like a three dimensional version of my ink and gouache drawings. She was made the same way I made OctoPolly and Lupe the Wolf Girl, but very different in terms of style.

I found myself very much enjoying the unpainted canvas bird on its own, actually. I think I'll try this pattern out for some simplistic bird form softies, sans the painting part. It was sweet, clean, and smooth. I like that. Pin It
Posted by alicia policia at Thursday, May 01, 2008

I'd waited to comment til I saw them all--though right of the bat, I knew they were gonna be awesome-o.

Beautiful work, my friend. I love the technique you're using.

As simple as the bird is, I think it's pretty great. Simple playing into wonderful.

You are representing my friend. Full on.

alicia, this little bird is my fave so far, i love her sleepytime magical look, she's very sweet!! tremendous work on Wolfie and Octopolly, they're too presh and look great!