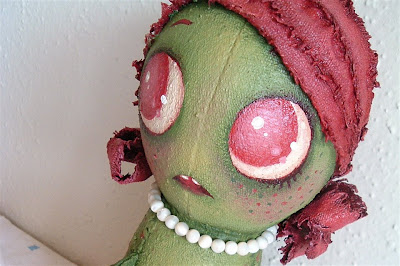 OctoPolly here was the second Painted Plush piece finished for Crammed Organisms, but she is one that has been an idea in my noggin since 2004.

Albeit, in 2004 the plans for an octopus girl Painted Plush involved a larger piece consisting of an octopod of sorts with worm tentacles, and a human head. As you can see, the idea evolved over time, and I happen to love the finished piece as is -- no human head, no worms. I was all about the worms a few years back... 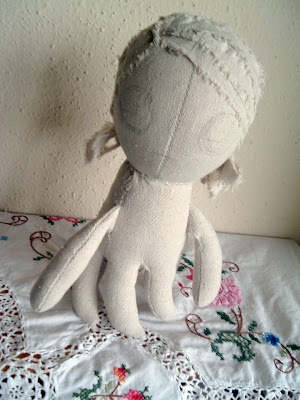 She was made in the same manner as Lupe the Wolf Girl. Here she is in her ungessoed canvas form. Developing her pattern and piecing was trickier, however, and I did have a few trial runs for the body before getting it right. Her hair is made from ripped strips of canvas, which was fun to sew, but a pain to gesso. 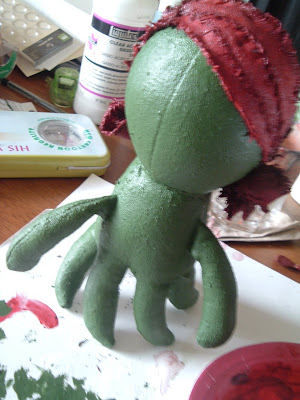 OctoPolly was primed with a clear acrylic gesso, hair and all. I then put down base coats of acrylic paint, at which point she looked like the above snapshot. 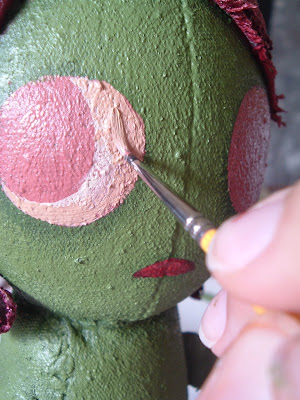 I managed to get an action shot of myself painting here. Holy crap! Is it ever hard to take a picture of your right hand doing something, using your left hand to operate your right handed camera. 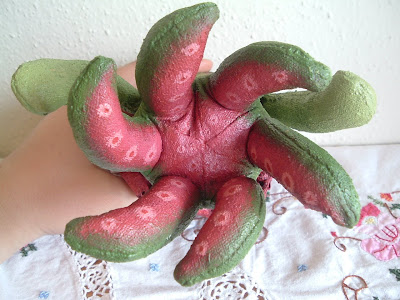 Here's a shot of her underside, which you can't really see when she's standing. It makes me think of watermelon. 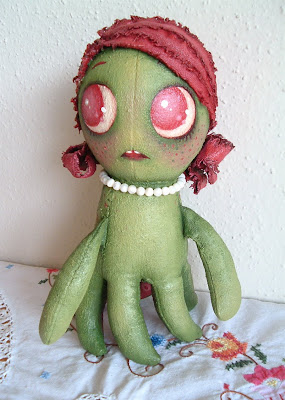 And here she is all finished up, with a real mother of pearl beaded necklace. She has freckles and spots on her back side too, but the pictures of that were lacking in cuteness.

The idea behind the character of OctoPolly was inspired by characters who want to belong, who are a bit of the outcast, a bit of a 'monster' or oddity, and who are reluctant heroes or 'diamonds in the rough' if you will -- unaware of their potential courage, heroism, and beauty.

Anyway, it was another case of me telling myself my artwork's story while working on it, which is something I've done ever since I can remember...except as an adult, I know not to tell that story out loud while I work, like I did when I was little.

Two more Crammed Organisms to go! (but OctoPolly here is probably my favorite) Pin It
Posted by alicia policia at Wednesday, April 30, 2008

She friggin rocks. We must get together so I can see how this is done. Awesome!

I love the expression on her face...a little bewildered!

She is adorable and all sorts of fantastic!