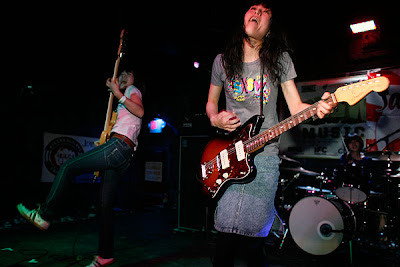 The awesome-o folks at SXSW pleasantly surprised me by sending over these pics of some musicians wearing one of my shirt designs from this year (the early 90's throwback neon shirt). This first one is of a band called Sodopp from Kagoshima, Japan. 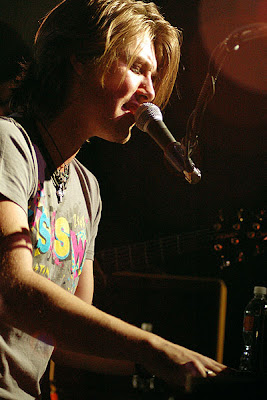 This second one is of Taylor Hanson of Hanson fame - how crazy is that? I reckon 90's pop t-shirt aesthetics appeal to those musicians with a pop aesthetic themselves... Now I wanna know who else bought my shirts. Hmmm...

By the by, if you felt the need to get your own early 90s throwback neon t-shirt groove on, or an alien boombox kid's tee groove for that matter, I believe you can still pic one up over here.

And FYI, the Sodopp pic is by Ben Sklar, the Hanson pic is by Austin Tolin and both are used with permission from SXSW, so there you go! Pin It
Posted by alicia policia at Friday, April 18, 2008

Email ThisBlogThis!Share to TwitterShare to FacebookShare to Pinterest
Labels: SXSW

Wow that's so cool! No better T-Shirt models than the rockers!

Paul and I were at Chuy's the other day and our waitress was wearing on of your shirts. I had to resist pointing at her left boob and telling her that we were on it. :)